The design is complete, it’s been approved, it has the blessings of the Gilbert Baker Foundation, and now it heads for production. The IEFPA is pleased to announce the release of our 2nd Edition challenge coin honoring Gilbert Baker, the creator of the LGBTQ Rainbow Flag. Activist, artist, and educator.

“Flags are torn from the soul of the people.” – Gilbert Baker

This beautiful, commemorative, one of a kind 1.75” challenge coin celebrates the life and achievements of a great gay icon. In 1977, after winning the election for Supervisor, Harvey Milk challenged Gilbert Baker to create a symbol of Pride for the gay community. Gilbert accepted the challenge and colored our world with the first Rainbow Pride Flag. The flag, with eight beautiful stripes, became a beacon of hope and inspiration for millions of people around the world. In 2017, shortly before he died, Gilbert added a ninth stripe to the flag, Lavender, to signify and celebrate our wonderful diversity. Making the flag even more stunning and meaningful.

“Dance fused us, magical and cleansing. We were all in a swirl of color and light. It was like a rainbow. A rainbow. That’s the moment when I knew exactly what kind of flag I would make.” – Gilbert Baker

It is with profound humility and admiration that the IEFPA has chosen Gilbert Baker as our first gay icon challenge coin honoree.

Thank you, Gilbert, for coloring our world.

NOTE: Production of the coin has be delayed. Coin will be available May 2023.

If you are curious about the look of the finished product it will be exactly like our first edition coin (see below) with the added Pride colors and Gilbert Baker inscription. 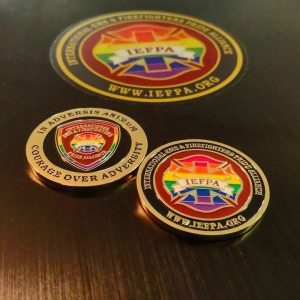 Support the IEFPA by purchasing decals, patches, and t-shirts.